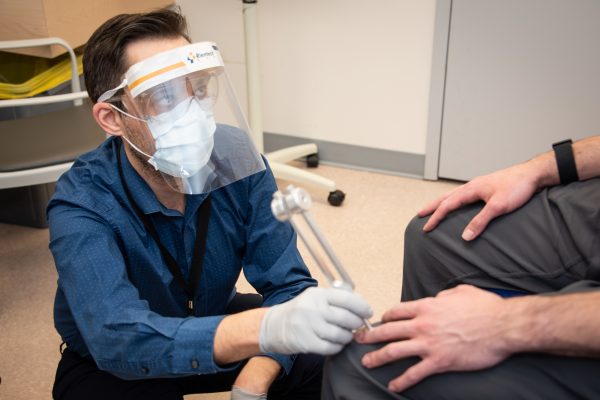 By Sophie Lorenzo, The Neuro

Researchers at the Clinical Research Unit of The Neuro (Montreal Neurological Institute-Hospital) are among the first in Montreal to investigate a promising new avenue in Multiple Sclerosis (MS) Research.

MS is a chronic autoimmune disease of the central nervous system. Canada has one of the highest rates of MS in the world, with an estimated 90,000 individuals living with the disease, most often beginning in young adulthood.  Previous research at The Neuro showed that B cells (a type of white blood cell in the immune system) play an important role in inflammation and brain lesions in MS. There are in fact different types of B-cells, some of which limit inflammation while other promote it.

“B cells play a diverse and complicated role in the immune system and in the progression of MS,” explains Dr. Alex Saveriano, a neurologist and principal investigator on these new trials at the Clinical Research Unit at The Neuro. “They act like a quarterback, directing other cells to perpetuate the inflammation that occurs in the disease. They also serve as an antigen-presenting cells, that is to say, they present a particular molecule to other cells in the immune system, such as T cells and direct them to attack.”

In individuals with MS, B cells direct T cells (another type of white blood cell) to attack myelin, the protective covering of the nerves. If the damage is substantial, the myelin may be replaced with scar tissue and interrupt the transmission of impulses through nerve fibers. This can lead to problems with vision, memory, balance and mobility. The effects of the disease are unpredictable and can be intermittent or progressive.

Some of the most successful recent treatments for MS deplete the B cells that express a protein called CD20 on their surface, with the aim of reducing MS flares and brain inflammation. The treatments have shown promising results in managing MS symptoms; however, by wiping out B cells, these medications leave the individuals who take them prone to opportunistic infections.

The new wave of research being undertaken for the first time at the Clinical Research Unit at The Neuro looks instead to target both arms of the immune system — not just B cells, but also inhibitors of Bruton’s tyrosine kinase (BTK inhibitors). The latter block a critical enzyme involved in B cell maturation to selectively remove unwanted B cells while leaving “helper” ones alone.

“Another advantage in this research is that some BTK inhibitor molecules seem to enter the central nervous system much more effectively than other molecules that deplete B cells,” says Dr. Saveriano. “The importance of the role of B cells in treating MS, and of treatments targeting B cells and slowing disease progression makes BTK inhibitors a very exciting development in the field, particularly in protecting the overall health and quality of life of individuals living with MS.”

This is always an important concern for individuals on these therapies, but never more so than during the current pandemic. Recent data published in April in the Annals of Neurology pointed to the fact that some individuals with MS who are on immunosuppressing anti-CD20 therapy were at risk for more severe infections and increased mortality from Covid-19. The medication also greatly reduced Covid-19 antibodies after vaccination, leaving these individuals vulnerable to infection.

“The Neuro has been at the forefront of bringing new treatments to patients with MS since 1986 when Dr. Francis Gordon first created the Clinical Research Unit, and participated in some fo the earliest MS trials leading to the first clinically approved medicine for this disease. But there is still much more to do. One of the limitations with our current higher efficacy treatments is that they may suppress the immune system too much, potentially impacting the patient’s ability to fight infection,” says Dr. Paul Giacomini, director of the MS Clinic at The Neuro. “If they are successful, the new clinical trials we have underway using BTK inhibitors would be an important addition to the MS treatment arsenal.”

For more on ongoing MS clinical trials at the CRU, visit cru.mcgill.ca/ms.